If long-term investing was easy then everyone would do it, right? 2022 tested the resolve of the long-term investor like we haven’t seen in 14 years. Stock and bond indexes across the board were down double digits almost from the get-go, and a 4th quarter rally failed to materialize leaving investors with sour eggnog for New Years. Before we predict whether this malaise will continue in 2023, let us take a look at our predictions from last year.

Year in Review–Our main thesis in 2022 was that the Federal Reserve (Fed) and monetary policy would once again be the primary driver of investment returns. Since the onset of the pandemic in early 2020, the Fed has engineered a dovish monetary policy to ease economic pressures. This accommodative policy stance has led to increased liquidity and massive distortions in the capital markets that have largely benefited all asset classes. However, it has also stoked the flames of inflation that have been compounded by historically large fiscal deficits. Faced with the dilemma of raising rates to combat inflation, which will in turn lead to slower economic activity, lower asset prices, and job losses, we felt the Fed would balk at significantly raising rates due to the political pressure of an election year. However, the Fed finally admitted that inflation was not just transitory, but structural, and adjusted in a big way. We completely struck out on this prediction. The Fed came out of hibernation with a vengeance and raised rates aggressively from the near-zero bound up to almost 4.5%. 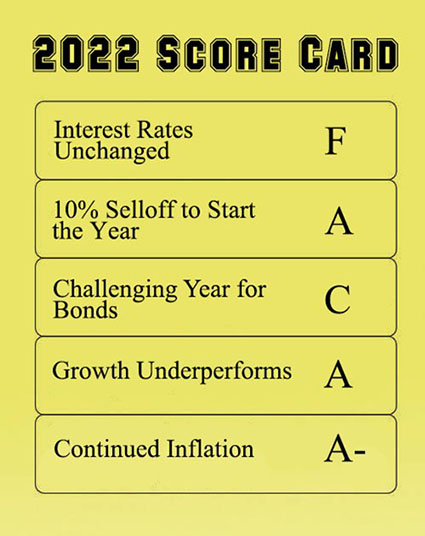 The odd thing is that even though our baseline prediction was completely wrong, the rest of our predictions ended up being fairly spot on. We thought coming into the year that large-cap growth companies like Apple, Microsoft and Tesla were overextended and ready for a pull back. We saw this in spades right out of the gate. The tech-heavy Nasdaq 100 index ended up losing an eye-popping 33% for the year. The selloff in tech was contagious, and it spread to essentially all segments of the market other than energy. 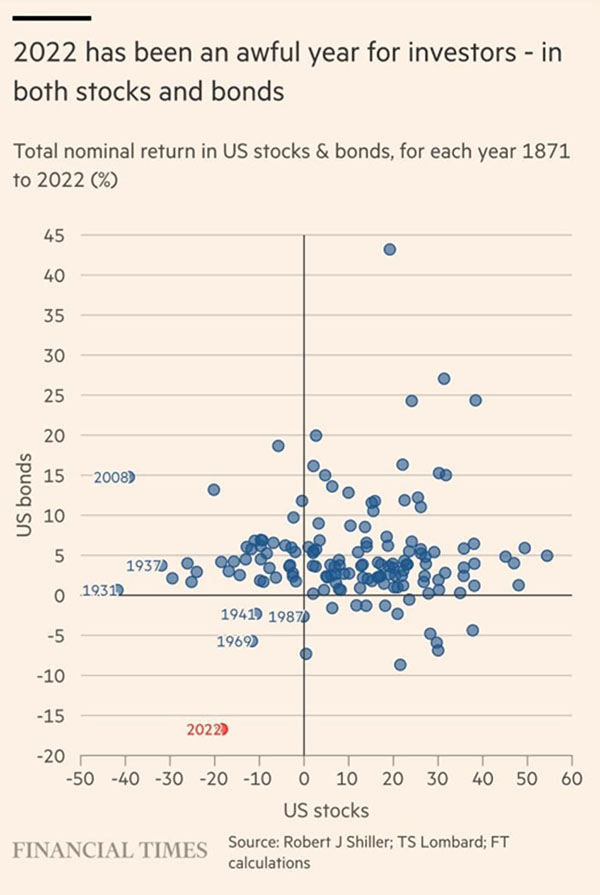 We also predicted that inflation would not be transitory and would be a continued problem in 2022. This was certainly the case for the first six months of the year, but the aggressive action by the Fed seems to have tamed peak inflation for the time being.

Finally, we came into 2022 bearish on fixed income, and we expected a challenging year for bonds. However, we thought they would still edge out a positive return for the year. Challenging was an understatement, as the aggregate bond index was down 13.4% for the year, giving bonds one of their worst years in a century. The combined negative performance of stocks and bonds lead to the worst combined nominal returns since the Great Depression; leaving the diversified long-term investor in an unfamiliar position.

2023 Predictions– With the taste of humble pie in 2022 still fresh in our mouth, hopefully, 2023 conjures up a different investment recipe. Given the starting point is much lower than a year ago, and much of the pain has already been felt in the economy, we believe that there are some exciting investment possibilities for the New Year.

Our primary thesis for 2023 is that inflation will trend downward for the time being, but won’t be truly defeated. The reason we don’t think inflation will return to the long-term target rate of 2% is due to structural changes in the global supply chain and the irresponsible long-term government spending by most of the developed world. While the aggressive actions of the Fed have been quite successful in deflating asset prices, their monetary policy tools can’t fix supply chain issues or curtail budget deficits. As a recent example, The $1.7 Trillion Omnibus Budget Spending bill that was passed at year’s end in the US will add another trillion dollar annual deficit to the already $31 Trillion national debt, and that debt must be financed in some way. With US Treasury short-term and long-term yields now exceeding 4%, the annual interest bill is going to climb quickly as those lower coupon bonds come due and roll over at the higher rate. It’s also not as if the US is alone in this scenario. There are numerous other developed countries spending significantly more than they are taking in, and that doesn’t seem likely to change. Given that fiscal policy is stoking inflation, we believe the Fed will be forced to stay hawkish on interest rates and are likely to keep interest rates elevated even if it comes at the expense of investors and job seekers. The rate of increases will likely slow down, and we may even get a pause here and there instead of the monthly gap-up we have become accustomed to. Frankly, this may not be the worst scenario as the pain of persistent elevated inflation can be much worse as seen throughout the 1970’s. During this time period, the Fed’s primary mistake was ending rate hikes too early.

Given this backdrop we are bullish on Fixed Income. US corporate and government bonds are now a viable alternative to owning stocks and other risk assets. Short-term US Treasuries currently yield 4.75%, and traditional money market funds are now yielding over 4%. Yes, year-over-year inflation is still hovering over this at 6.7% as of November, but that figure is slowly reducing while bond yields continue to rise. This is the polar opposite of where we were a year ago when investors were forced into the stock market because of anemic yields. With many investment-grade corporate bonds yielding 5-7%, we think that many investors will start to take a look at bonds again as an alternative to equities. However, there are potential default risks in corporate debt, so one needs to be careful in bond selection in that arena.

With respect to the stock market, we find ourselves currently neutral on equities. We expect volatility to continue due to the unknown trajectory of interest rates and the current geopolitical climate, which will likely lead to being plus or minus 10% at some point during 2023. Provided that the Fed does indeed pause rate hikes in the first quarter as many expect, we don’t foresee a deep economic recession on the horizon due to a tight domestic labor market. We also don’t see a booming economy either, but if we can muddle through 2023 with 1%. GDP growth, then stocks should end up on the positive side of the ledger. Outside of the US, the economic climate in the rest of the developed world is decidedly worse. Europe is dealing with energy prices that are drastically higher than ours due to reliance on Russian oil and gas. Their central banks are also behind the curve on inflation and haven’t hiked rates as quickly as here in the US. For these reasons, we once again remain bearish on international equities in 2023. 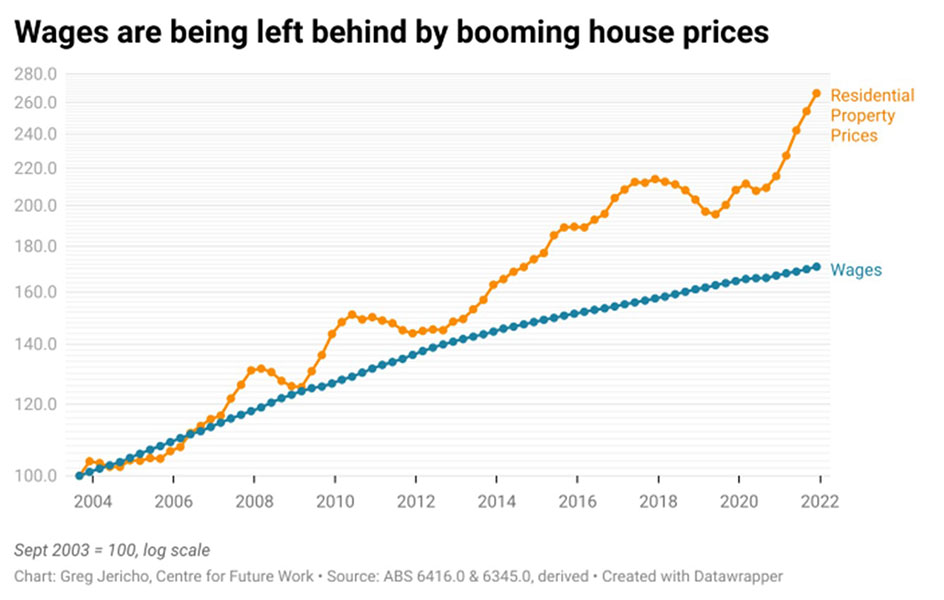 If the US economy continues to grow, it is unlikely the Fed will cut rates in 2023, which means that mortgage rates could continue to hover around 7%. In the short term this most likely results in a very stagnant real estate market with minimal transactions. Property prices have significantly outpaced wages over the last two years, and that is despite some of the strongest wage growth in a generation. While all real estate is local, on a large scale we expect price depreciation in real estate which is needed to bring us back to the normal trendline.

Last year was frustrating for investors. It was a year you most likely lost money regardless of your strategy. While it was frustrating, it was also necessary. Insane valuations in unprofitable companies and 0% interest rates aren’t the foundation on which a reliable investment portfolio can be built. Markets have thankfully adjusted into a much healthier equilibrium where the diversified investor can hopefully thrive again. As famed equity investor Peter Lynch once said, “Although it’s easy to forget sometimes, a share is not a lottery ticket… it’s part-ownership of a business.”