According to Nobel Prize winning economist Harry Markowitz, “Diversification is the only free lunch.” Markowitz introduced the concept of Modern Portfolio Theory (MPT) in 1952, and the crux of his model was that investors can reduce portfolio risk and volatility by holding a diversified basket of non-correlated investments. Essentially, when one investment is doing poorly, ideally others in the portfolio are going in a different direction to make up for those losses.

Adherents to the MPT philosophy have seen great benefits over its first 60 years of use. For example, in 2008 the S&P 500 lost a staggering 38%, however, treasury bonds went up around 20% that year. Thus, a 60/40 portfolio was potentially only down 15% thanks to the benefits of diversification.

But here we are in 2022, and unfortunately, all assets have moved in tandem making the benefits of diversification nominal at best. Asset classes across the board have losses ranging between 15% to 35%, and the classic 60/40 portfolio is having it’s worst year since 1937 making that “free lunch” look like frozen hotdogs dethawing in the sink.

Is it time for the investment community to start looking at diversification differently? In the current economic backdrop we now think the idea of forcing exposure to every asset class might be outdated. Over the past five years or so we have started to notate certain asset classes as “dead money”. We felt that these assets had minimal chances to produce positive results for investors.

The first such asset class we identified as “dead” was international bonds back in 2018. At that time the entirety of the developed world seemed to be in a race to lower interest rates to zero, and in some instances such as Japan and Germany rates actually went and stayed negative for a prolonged period of time. Predictably, once rates had reached the zero bound, there was no where to go but up, making returns on the international bond funds average a loss of about 1% annually over the past 5 years.

If you think that an asset class has very little chance of positive returns over the next 3 to 5 years, then why should you own it? MPT suggests that you should, because the sum of the parts is greater than the whole, but maybe the acceleration of central banks around the world printing money has altered the risk return metrics and changed the equation of what is the most efficient portfolio to achieve the desired results. With the glut of cheap money awash in the world for the last decade, we have seen many markets get severely distorted and move from bubble to burst. It has created a scenario where there has been too many dollars chasing too few opportunities, and this phenomenon has created situations where entire asset classes are over-valued giving them little if any chance to produce positive returns in the near term. So, what asset classes do we consider “dead” at the moment?

Emerging Markets– We eliminated the use of emerging market equities (think China, Russia, Latin America) several years ago, and we continue to believe this asset class delivers an uninvestable risk/reward. The reason for this is two-fold. First, in today’s interconnected world there are few reasons for companies to domicile in emerging market countries in order to do business there. US companies like Apple are more than capable of delivering iPhones across the globe and profiting without a need to be based abroad. Secondly, the political and currency risk involved in emerging markets is far too great for the expected returns. Chinese stocks give a great example of this. Despite China having one of the fastest periods of economic growth in world history, Chinese stocks have delivered a negative total return over the past 15 years. One of the reasons behind this is a lack of faith that Chinese companies won’t be wholly absorbed or controlled by the communist regime there. Under President Xi, the regime has launched punishing regulatory and anti-trust campaigns against companies, and the flow of information and verifiable financials are lacking at best. Even Jack Ma, who founded Alibaba and went on to become the richest man in China, finds himself exiled from public appearances after criticizing Chinese regulators. If the richest man of China can’t get a fair shake, then what hope should other foreign investors have?

Commodities– While 2022 has been a great year for commodities thanks to inflation, it is a bit of an aberration compared to the track record for the past decade. Despite being up around 20% this year, the commodities index has produced negative returns over the past 10 and 15 year periods. Some of the same issues that plague the emerging markets sector also hamper commodities. Many commodity producing operations are based in unsavory locales that probably aren’t on your travel bucket list, and it isn’t uncommon for countries to nationalize private assets. Venezuela provides a classic example where the entire oil industry was nationalized in the 1970’s, and they did so with zero compensation to equity owners. Aside from the negative track record, it is also difficult to trade efficiently in commodities as taking possession for physical storage is not suited for an individual investor. There are some mutual funds and ETFs that try to simulate this exposure without having to take possession of the commodities, but they are prohibitively cumbersome and expensive due to high internal fees and the loss of value due to the constant rolling of futures contracts from one month to the next. 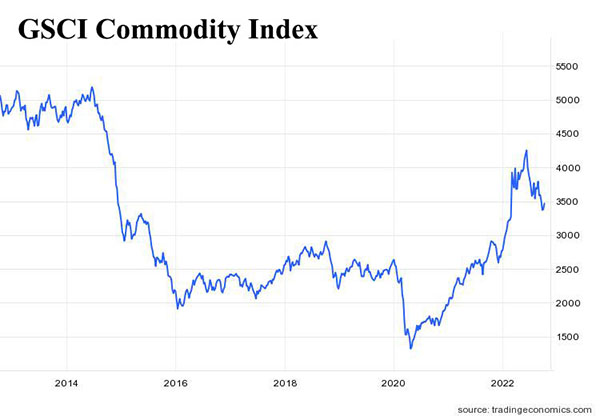 International Equities- We wouldn’t call this asset class “dead,” but it is in on life support. International equities from countries in Europe and other developed nations have produced negative total returns for the past 5 years and have only returned around 3% annually for the past decade compared with greater than 10% for US stocks. While we don’t expect International stocks to return negative results over the next 5 years, we also don’t feel that international equities provide a compelling upside that warrants the risk in this asset class. With undesirable population and demographic trends, structural currency issues, as well as a difficult economic environment due to a lack of domestically sourced natural resources, companies domiciled abroad face a difficult hurdle to compete with their American counterparts. On top of these challenges, the business regulatory environment is much more cumbersome which has created a large void in successful startups overseas. While US regulations are far from perfect, they are seen as much less intrusive and expensive than what companies experience abroad at this time. Until Europe and the rest of the international space becomes more business friendly and competitive, we advise being underweight international stocks.

Can an asset class come back from the dead? The answer is yes, but not without a severe sell off. After the pain the bond market has taken this year we must say that US Treasury bonds are now an exciting asset to own again. Towards the end of last year the one year Treasury bond was yielding an anemic 0.01% and other short term maturities weren’t much better. However, after the worst bond sell off in around a hundred years the rate of return on a one year Treasury is 4.2%. Investment grade corporate debt is now paying over 6% for the next decade giving risk-averse investors potential returns they haven’t seen this century. So, while bonds failed in delivering their diversification promises this year, we expect them to fair far better going forward and even have potential to be a top performing asset over the next 3 to 5 years.