Over the course of this century, we’ve seen some pretty epic bear markets. Battle scars remain for anyone who went through the dotcom bubble bust in 2000 or the 2008 banking crisis. However, during both of those bear market storms, the diversified investor was able to find some shelter in the fixed income markets. Unfortunately, in 2022, the bond index is also down a whopping 10%. When you combine that with a negative 20% year-to-date performance for the S&P 500, and 30%+ losses in the Nasdaq and small/mid-cap growth stocks, it makes a strong case for this being the all-time worst start to a year for investors.

The big question now is where do the Markets go from here? For the past decade, the best barometer for the direction of the stock market has been Federal Reserve (Fed) interest rate policy. Consistently low rates and easy monetary policy by the Fed had forced investors out of fixed income and into riskier growth assets such as stocks and cryptocurrencies. This chasing of growth climaxed in the last half of 2021, and with it came some very silly valuations on companies with no earnings, and in a few cases on companies with no revenue. Take Rivian Automotive, for example. The electric car maker went public in November of last year, and quickly shot up to a market cap valuation of over $150 billion dollars. While the company may eventually become a serious competitor in the automobile space, it has never even produced a vehicle as of their IPO, and the market conferred a valuation higher than GM and Ford combined! With pandemic stimulus money abounding and risk-taking at full tilt, there is a long list of stocks we’re calling “COVID Darlings” that exhibited a similar pattern and went up 300% or more over the past two years.

Then interest rates started to climb… Interestingly enough, this started to occur in December of last year which was five months before the Fed ever started to officially raise rates. You might even say that the bond market forced a clearly reluctant Fed off the sidelines. However, once off the bench the Fed came out hot and has since caused most market interest rates to climb 2 to 3%. For example, the 30-year mortgage went from a 3% rate in November to over 5% today.

The rise in interest rates has caused a repricing of all asset classes, but the most pronounced change has been in the once high-flying growth stocks. Take Rivian, our example from before. It is now down an astounding 84% from its November highs. Their losses aren’t unique either, with many “growth” stocks being down between 40-90% from their prior highs. So, that’s essentially the recap of where we are today. Nearly all investors are down 15% or more, diversification hasn’t really helped, and if you were very aggressive the past year, you’re likely down over 30% in 2022. 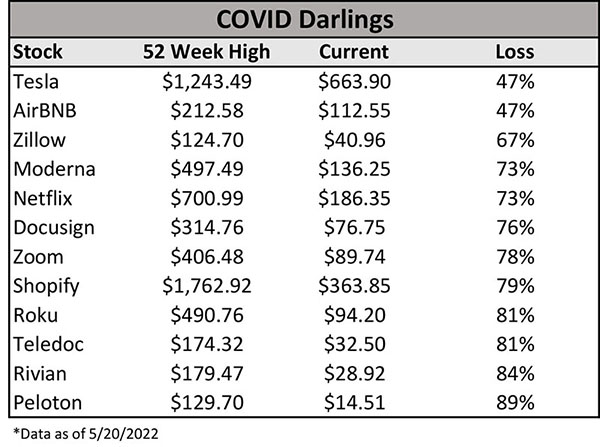 Now for the good news! By many metrics, the stock market was overvalued coming into this year and was badly in need of a correction. With valuations already skewed, adding the war in Ukraine, persistent inflation, and a newly hawkish Fed, the momentum has cascaded downward in a hurry, and now the correction is well under way. Only in retrospect will we know how short-lived this downturn will be, but you can draw some comparisons to recent corrections. In the dot com bubble sell-off from 2000-2003, the “growth” stocks in the NASDAQ bottomed out after an 80% correction. The NASDAQ of 2000 was made up of companies that are much lower quality than it is today (think Pets.com vs. Apple), and more resembled our “COVID Darlings”. In just 6 short months, the high-flyers of last year have sold off an average of around 70%. So, they’ve managed to sustain similar damage as the dot com bubble, but in a fraction of the time. The relentless selling and the speed of the losses taken lead us to believe that the bulk of the damage to this market segment is over. 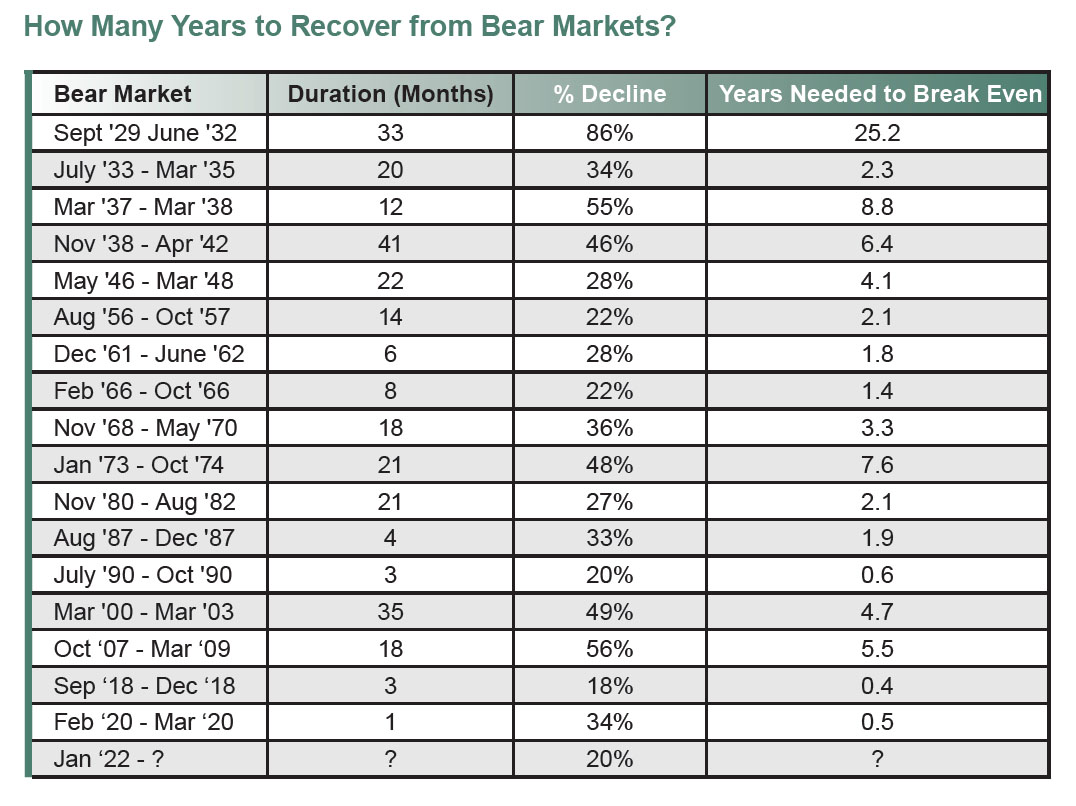 A lot of people out there are worried about recession and further market losses. The reality is that we are most likely already in a recession, which is defined as two straight quarters of negative economic growth. Gross Domestic Product (GDP) for Q1 2022 was -1.4%, and all it takes is another negative print in Q2 to technically be a recession. We think that market participants have already figured this out and have started to price in this inevitability. Hence, the current correction is pricing that likelihood in and it would take something else not currently known to push the indexes much lower. With low unemployment and domestic inflation hopefully peaking, we could have the table set for a strong economic second half of the year should we see an abatement in monthly inflation figures. This would give the Federal Reserve the cover to pause further interest rate increases, and that could potentially be the impetus for solid returns going forward in both stocks and bonds.

Bear markets are always painful, but they are a necessary part of being a long-term investor. If you can handle the current volatility, there are some very attractive opportunities now in low and high-risk investments. This is a great time to rebalance portfolios for the next five years, and if you’re like many people who have sat on excess cash for a while, now is a great time to put that to work.