Another year, another round of double-digit market performance. Who knew a global sickness could make your portfolio so healthy? Does pandemic equal profit? Before we predict if the second coming of the roaring 20’s will continue, lets take a look at our predictions from the past year.

Year in Review– Last year, our broad thesis was that the Federal Reserve “Fed” would leave rates unchanged for 2021, which would give us another year of outsized performance in equities. We surmised that low interest rates and very easy earning comparisons from 2020 would give stocks room to continue their three year double digit climb.

This projection was spot on, and the broad domestic stock indexes rose anywhere from 10% for small-caps to 26% for the large-caps in the S&P 500. Sector-wise, we felt that some of the laggards in 2020 like financials, travel/leisure, and energy would rebound the most given their lower valuations and improving economic climate as the economy re-opened. While most value-oriented stocks still trailed their growth peers, energy stocks climbed over 50% for the year making it the biggest sector winner in 2021. International stocks also generally had a positive year with the MSCI World index climbing close to 10%. This was brought down significantly by a really sub-par year from the subset of emerging markets like China. We predicted that International stocks may finally break out of their losing streak to domestic equities due to lower relative valuations and a potentially weaker US dollar driven by policy changes and government spending. As it turns out, the dollar strengthened against most major currencies in spite of these factors, and once again, the international equity space remains relatively unloved. It is humbling as an investor to get the thesis right, but not have the investment outcomes match.

Shifting gears to the fixed income market, we predicted that continued low interest rates would have an impact in the bond market that would likely cause it to have a rare negative year of returns. With the supposed “transitory” inflation sustaining throughout the year, bonds continued to be pressured and the aggregate index closed down 1.7%. 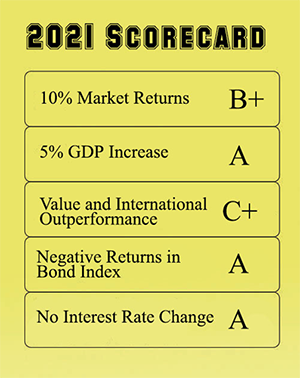 With the consumer price index (CPI) posting an overall inflation figure of 6% for 2021, and many internal components such as gasoline and food jumping much more than that, it is somewhat surprising that areas of the market traditionally levered to inflation were a mixed bag. Public and private real estate investments did particularly well in this environment and surged 20%+, but precious metals such as gold had a mildly negative year down 4.1%. This could have been due to some investors preferring the new “digital” gold of cryptocurrencies over the physical metal. Bitcoin, the largest of this asset class, posted a gain of 62% for 2021 — though it was quite a rollercoaster ride from start to finish.

Despite all the economic stimulus, trillion dollar budget deficits, global supply chain issues, rampant inflation, and continued disruption from the Covid-19 pandemic, it seems almost illogical to end the year on such a high note. But, as we’ve said before, often times Wall Street and Main Street can drastically diverge for periods of time. 2021 was another great example of the market climbing the wall of worry, and a reminder that staying invested and diversified is the best solution for long-term success.

2022 Predictions- The crux of our investment thesis the past several years has been based on the Fed and it’s accommodative interest rate policy. In 2022, we are going to continue riding that horse until it bucks us. However, we disagree with the current general market consensus that the Fed will institute two or three 0.25% rate increases over the next 12 months. While we completely agree that this should happen and would be healthy for the markets and economy to normalize rates from the zero bound, we believe the Fed will not meaningfully increase rates this year.

The Fed is in theory, apolitical as its members are appointed by various presidents and serve staggered terms longer than their appointees. However, this prognosis seems to be contradicted by the hard data since the beginning of this millennium. Throw in that the Fed Chairman role is up for renewal in February and that this is an important mid-term election year, and we find it hard to believe that a tighter monetary policy will come to fruition. Yes, current chair Powell (who is a registered Republican and was appointed by Donald Trump), was given the nod by the Biden Administration to likely retain his post, and the committee has already telegraphed that they plan to reduce their monthly purchases of Treasury bonds and mortgage securities, but we don’t believe the current leadership has the will to follow through with the hawkish course of raising rates three times. In fact, it’s hard to ignore the pattern related to interest rate policy and political party control over the past two decades. Since 2001, of the last 54 Fed rate changes, 52 have been implemented with either a sitting Republican president or president elect. Based off any historical precedent, interest rate policy should have already been increased in 2021 to try and combat extraordinarily high inflation. Throw in extremely low unemployment, a soaring housing market, and three consecutive years of stock market returns over 15%, and they are running out of excuses not to raise rates. Yet, here we are still at nearly 0% interest rates. The data pattern strongly suggests the Fed prefers a more hands-on approach to economic management during Republican administrations and a more laissez-faire style for Democrats. Whatever excuse is given, whether it’s short-term market volatility, or potential economic disruption from the variant du jour, we suspect the Fed will use it as cover to sit idly in 2022. 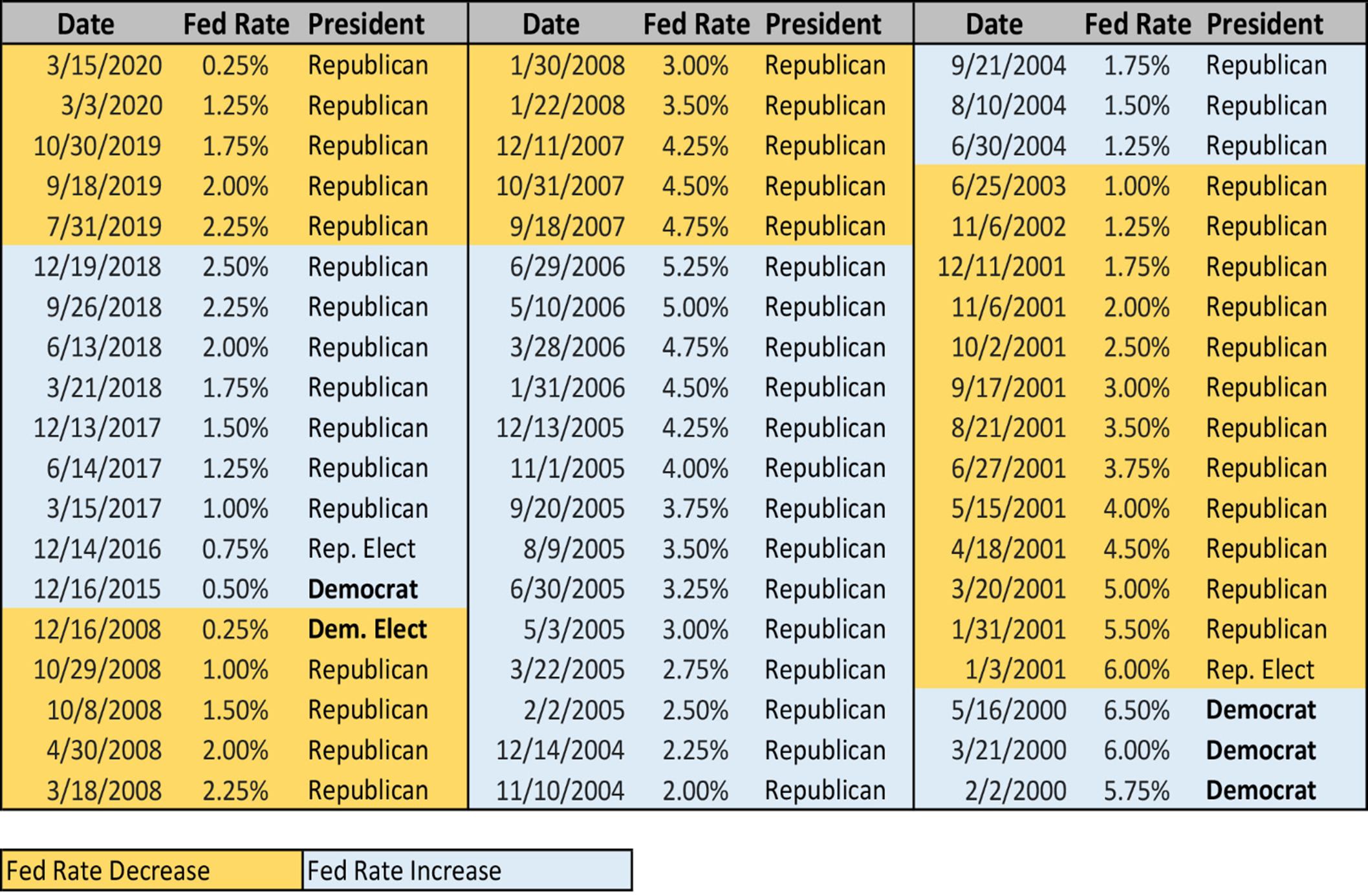 With that rationale in place, we are disposed to still favor stocks over other asset classes. It would be hard to imagine that returns will be as good in 2022 given the lofty valuations and tougher year-over-year comparisons, but low interest rates have a way of distorting valuations in the short-term. We think that 2022 will include more “borrowing” of future returns to satisfy current investors, but it won’t come without hiccups. There was minimal market volatility in 2021, and we are badly overdue for a 10%+ correction. That correction could come in the first half of the year, and we would be inclined to be buyers of stocks at that point based on our interest rate thesis. In fact, this sort of pullback may be just the sort of excuse the Fed needs to push back the time-frame of their rate increase into future years.

In 2022, we believe bonds will have another challenging year. However, we do think that they will eek out a positive return as the fixed income market is likely pricing in a couple interest rate hikes at this point that we believe will not materialize.

Inflation has shed its “transitory” label and has been a disruptive force, and we expect it to continue to a slightly lesser extent this year. This won’t crush GDP growth since increasing prices generally help that calculation, but we do expect it will be a major factor in the decisions of households on how to use their disposable income. This will likely lead to a slower GDP growth rate of around 3%.

Last year we alluded to some danger in the high-growth segments of the market, and that pitfall is still very much out there. The Shiller Price to Earnings (P/E) ratio tracks the market’s average valuation over the last 10 years, and currently we are hovering at similar levels as the 2000 dotcom boom. The large and mega-cap tech companies like Apple, Microsoft, and Tesla must continue to deliver stellar earnings results in order to justify these valuations. Alternatively, it might be time for their run to pause in order for valuations to become a bit more reasonable. If there is a pause, this could be a nice backdrop for small and mid-cap stocks to deliver relative outperformance.

In summation, sometimes the solution to rich valuations in equities is, oddly, to own equities. The downside of a low interest rate environment is that bonds provide less downside protection. Come the next recession, fixed income securities may have as much risk to them as stocks, but with none of the upside potential. Quality value-oriented companies with dividends of around 2% or more can still be found, and these are the most attractive asset class to us for 2022. In past bubbles, they have provided protection and eventual market outperformance, and we expect the same during the next inevitable market sell-off. Plus, equities and real estate exposure are historically some of the best hedges you can have against high inflation.

After two years of great uncertainty, you can be quite certain that 2022 will be filled with more of it. All any of us can do is expect the best, but be prepared for the worst. We expect positive returns in 2022, but don’t expect a smooth ride to get there.