At this time last year, we pondered whether the quarantine bubble might be giving way to a stock market bubble. With stocks continuing their meteoric rise through 2021 year-end, it seemed almost inevitable that a correction of some sort was due. In our January newsletter, we discussed our market predictions for 2022 and pointed out that a 10%+ pullback was likely in the first half of the year. Unfortunately, that prognostication is playing out. Many sectors of the market were down 20%+ in the first few months, but lately, in spite of all the financial and geopolitical volatility, markets have recovered a significant portion of their losses. So, what does the rest of the year hold for investors? We’ll take a closer look at the four major market moving themes thus far and analyze which one will have the most impact on your portfolio.

Let’s start with the elephant in the room — Covid-19. Clearly the virus that caused a global shutdown and 35% stock market pullback in 2020 has had a substantial impact on investors. Thankfully, after the briefest recession ever recorded, the U.S. economy has begun to rebound and many health measures that were imposed during the beginning of the pandemic have been removed or eased. Treating Covid as more of an endemic disease has led to a marked increase in consumer activity and created a large imbalance between supply and demand. As businesses have ramped back up production to meet the changing demand, shortages of materials and supply chain disruptions have become all too common. The resulting economic disturbances have led to the rise of inflation domestically and abroad that we haven’t seen since the 1970’s. However, even in the face of close to double digit annualized inflation gains, the market hasn’t felt the same pain as consumers. Part of that may be due to the feeling that any Covid supply-chain related inflation is temporary and will eventually work itself out. However, we have fallen for the “transitory” vs. “permanent” debate before in regard to inflation, and now the market is playing catch-up as higher prices dig in for a second straight year. While we do think that the Covid-related supply issues will curtail, the anti-globalization trend will provide a natural source of inflation for many years to come. Businesses around the world are no longer willing to be at the whim of other governments’ policies and procedures and are trying to source more materials and production domestically. This may prove to be a great source of jobs and national security in the long run, but it is likely to force prices higher since wages and building new factories in the US are much more expensive than the global supply chain has become accustomed to.

Speaking of inflation, enter the Federal Reserve (Fed). Chairman Jerome Powell was appointed for a new term in February, and he promptly raised interest rates from the zero-bound for the first time in two years. Although largely symbolic at this point, a quarter point rate hike was felt most significantly by the bond market and through mortgage rates for home owners. Usually bonds and stocks have a negative correlation, meaning that when one zigs the other zags. However, in 2022 the aggregate bonds index is down 6% due to the threat of the Fed raising interest rates much further. In fact, the market seems to be pricing in a half point jump in each of the next two months, plus several more quarter point hikes through year-end with a target rate of 2.25-2.5%. This is being reflected in the Treasury yield curve already, which has seen the 2-year yield jump to 2.44%, which consequently is higher than the 10-year yield of 2.38%. This yield curve inversion has a history of being a harbinger of a recession in the next 6-18 months. However, on the bright side, the lower 10 to 30-year rates point towards the market’s belief that inflation will be brought under control and not pose a long-term threat. The jury is still out on whether the Fed can tighten rates appropriately, strike a balance that brings this economy to a soft landing, and avoid too little or too much monetary intervention. 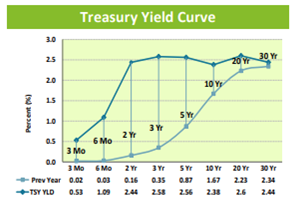 The headline grabbing the most attention this year has been the war in Ukraine. This geopolitical conflict has created a significant amount of fear in the financial markets and pain to our pocketbooks as we fill up our gas tanks. Setting aside the tragic human element that is directly affecting those in Ukraine and Russia, the shockwaves have also been felt by investors. The Volatility Index (VIX) is referred to as the market’s “fear gauge.” It measures investors’ expectations for volatility in the S&P 500 in the next 30 days. Historically, the VIX has averaged a level of around 19, though has spiked as high as the 80s in March 2020 during the Covid-induced market selloff and in 2008 during the pinnacle of the great financial crisis. At the beginning of the year, the VIX stood at 17 — pretty close to average levels. In late January when Russia began to amass troops at the border, the VIX peaked at 38 on January 24th. Shockingly, it hasn’t exceeded that level since, even though the actual invasion didn’t occur until February 24th. In fact, the S&P 500 also bottomed on that day, exactly a month after “fear” was predicted to have the most impact, and it has been a somewhat steady 10% climb back up for stocks since. This is, unfortunately, all too good a reminder that the market likes to climb the wall of worry. As investors, we need to remember that the pricing of the market is forward-looking, and generally the time to buy feels like the time to panic. Hopefully, we have felt the worst investment impact the war in Ukraine has to offer, but that likely depends on how the conflict resolves.

In the meantime, it’s not just stocks that are feeling the pain. Significant natural resource disruption to supply chains across the globe have sent many commodity prices through the roof. Everything from energy related oil & gas, to agricultural commodities like wheat, to resources like nickel and neon gas are spiking due to significant production going offline in Ukraine. As if Covid-related closures around the world haven’t complicated logistics enough, the impact of shortages are driving prices up further and inflating the cost of everything. According to the most recent Consumer Price Index (CPI) data, in February, prices jumped 7.9% compared to last year. However, the energy component jumped 25.6%. Unfortunately, energy is one of the most important direct input costs to farmers and miners, thus the S&P GSCI Commodity index is up 29% YTD, and many individual elements have eclipsed that mark.

Where the markets go from here will be a complicated give and take based on these four investment themes. Investors should continue to stay diversified, avoid panicking, and keep enough cash equivalents on hand to avoid selling during the dips.