Some of you may have seen the recent article in the Wall Street Journal about a dentist in Utah who has accumulated $1 million in student loan debt. Before you write this off (pun intended) as a rare, one-of-a-kind case, you should know that according to the Department of Education, 101 people currently owe that much or more in federal student loans! In fact, around 2.5 million people owe at least $100,00 in student debt.

The 37 year old dentist, Mike Meru, obviously took a big gamble on his education and hoped that the investment in his future would eventually pay for itself. In this case, it may or may not. Laws concerning the payment of student loans have changed quite a bit over the years. You can no longer claim bankruptcy and get rid of them, but if you aren't able to pay them off within 25 years, the remaining balance will be forgiven (sigh..covered by us taxpayers), but taxed as ordinary income. In the case of Dr. Meru, he entered into a government sponsored payment plan based on his income level that allowed him to make monthly payments equal to 10% of his discretionary income. This comes to $1,589 a month. Without government help, the monthly payment would be $10,541. Given that Dr. Meru makes $13,333 per month after taxes, that chunk would certainly be unmanageable. He will watch his total debt climb to over $2 million by the end of the 25 year time frame. When forgiven, the debt forgiveness will net a tax bill of approximately $700,000 at his current income bracket. How will he pay for that then? I think we can all say "wow" to figures like these. 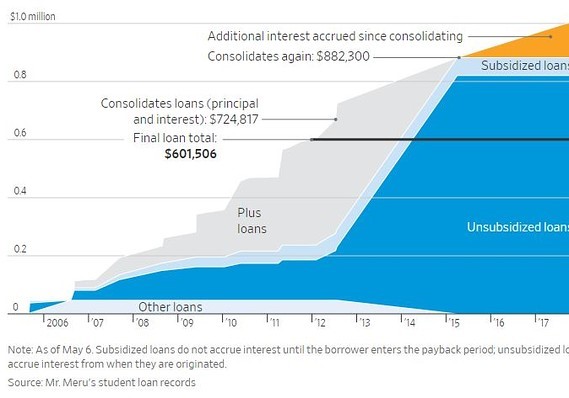 It's perhaps mind-boggling to most people how anyone could end up in that situation, but from reading the article, I can see how it developed and exploded to the level it is now. It reminds me of the story of a frog in a pot not realizing it's getting too hot until the water is boiling.

Dr. Meru never intended for the debt to get this high, but what started out as smaller loans with lower interest rates ballooned into a giant mess with the compounding of time and interest. In 2005 when Dr. Meru first started his education at USC, tuition was $56,757 and the interest rate was 2.77%. In his second year, tuition jumped 6% and the interest rate more than doubled to 6.8%. As you can probably guess, tuition at USC continued to rise and now would cost about $91,000, or approximately $137,000 when you include living expenses. Whether it be dental school or some other post-graduate degree such as an MBA, or law degree, keep this in mind as you plan for yours, your kids, or even grandkids' education funding. The cost of a college education has continued to skyrocket over the last decade and modeling at least a 5% rise in cost each year would be prudent.

Another mistake that plagued the early years of Dr. Meru's debt problem was making only the minimum payment. One could argue that it's difficult to study, get a job, start a family (in his case) and do more than that, but the debt adds up quickly. It's like the reverse of dollar-cost-averaging into your 401(k) at work. The bigger the debt in the earlier years, the faster it will compound, especially when you are only paying interest and not paying down the principle. Another major blunder happened when he graduated and used a government option known as forbearance. This allows a borrower to postpone payments, and Dr. Meru felt it a necessity in his first years out of school to support his family. Meanwhile, the interest continued to accrue and he expanded his debt monumentally through the miracle of compounding.

Make sure that you factor this in when deciding which degree and career to pursue. Dr. Meru earned $225,000 last year, which is much higher than the median income for dentist of $158,000. Clearly his education has helped him achieve an above-average job in a corporate practice, but was it worth it? He will never get out from under the mountain of debt he piled up at that rate. Again, it sounds like Dr. Meru had the best of intentions and even made a calculation before deciding on this path that turned out to be incorrect. Just because unlimited student loans are available to you and the colleges financial aid directors tell you what to expect, it doesn't mean you should jump aboard full tilt. Consider your earnings potential and whether the cost in the end justifies the investment in your education.