In roulette there are a variety of strategies available with varying levels of risk involved, much akin to playing the stock market. One can go high risk and bet on a single number praying for the big payout; or, play it safe and simply bet on red or black. However, on occasion the dreaded 00 is rolled where pretty much everyone is a loser for playing the game. For investors, 2018 was the equivalent of a 00, where you most likely lost for having participated. The question for the savvy investor is do you stop playing or double down?

Year in Review—Before we get into our 2019 predictions let's take a look at how our prognosis for 2018 panned out. Our baseline thesis for last year was that the US economy would post solid growth numbers on the back of the new tax stimulus bill. We felt this strong growth would translate into two interest rate increases of 0.5% and stock market returns of around 10%. Additionally, after an extremely low volatility year in 2017, we expected a significant increase in volatility in 2018. 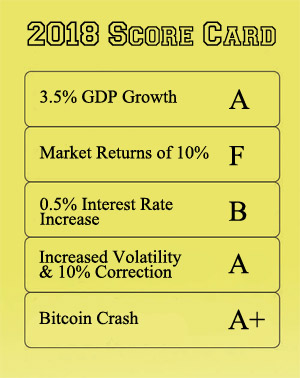 Through the first three quarters of the year, all our predictions were spot on. GDP growth was annualized at 3.3% and the US stock market was up around 10% after two 25 basis point increases in interest rates. Then, like the Energizer Bunny, Chairman Jay Powell at the Federal Reserve kept going and going… In a move that many felt was ill-advised considering the economic data, the Fed raised interest rates two more times to close out 2018. The markets shared this sentiment, which in our opinion, was the primary impetus for pushing us into the first bear market correction we have seen since 2008. Over the last 3 months of the year, most major indices saw corrections of 20% or more, and our Santa Clause rally was nowhere in sight, as St. Nick must have overslept after a bit too much eggnog.

Unfortunately, timing is everything, and the hawkish move by the Fed and continued rhetoric between the US and China, along with the uncertainty of the mid-term elections ended up giving all market participants a failing grade. Except for cash, essentially all asset classes ended up with negative returns in 2018. Bitcoin led the way with an astounding drop of over 80% from it's high of $20,000 per coin. As a professional investor, I must say 2018 was one of the most frustrating years of my career. During the last big sell-off in 2008, there was at least some refuge to be had in the bond market, as high quality bonds returned over 10% during the bear market. While the year end print for the S&P 500 doesn't look all that bad at a 4% loss, returns were much worse for those diversified in small cap and international stocks. Unless you exercised superior market timing in 2008, your portfolio suffered, and diversification brought little value.

2019 Predictions—In the current volatile market, moves of a thousand points or more over the course of a few hours have become commonplace. Given that environment, the thought of making predictions for the entire year is a bit daunting at the moment. However, let's kick it off by taking a side on one of the most talked about terms these days — "bear market." As opposed to a correction, which is a short-term sell-off less than 20%, the typical definition of a "bear market" is a drop from peak valuation of more than 20%. Including the most recent drop in the 4th quarter, there have been 16 bear market plunges since 1929 (or every 5.5 years on average). These large drops in asset values can last a few weeks or multiple years (The previous example occurred during the financial crisis from October 2007 through March 2009). These bear markets can last a few weeks (cyclical) or several years (secular). The big question now is how long until this bear goes into hibernation? In our opinion, that answer is up to a handful of people at the Federal Reserve. Throughout history, over-tightening by the Fed has often driven the economy into recession. Hindsight is always 20/20, but just once you'd expect the Fed to get it exactly right and not overshoot. In fact, the Fed has never projected the economy will enter a recession—talk about positive thinking! Though the Fed may have moved too far, too fast, it's still possible that we could strike a nice balance in 2019. Remember the so-called "goldilocks" economy of the last few years where we weren't too hot or too cold? Hopefully, the Fed can bring back that kind of investing climate.

At some point during 2019, we anticipate the Fed will announce a pause in rate hikes. The current market anticipation is for another two 25 basis point hikes. We think/hope that it will only be one or less. Once that occurs, we foresee a significant market rally to follow. So, while we may experience more pain to start the year, our end of year figures should end up in the green. The US stock market rarely has consecutive down years. In fact, it has only happened 4 times since 1950. In those instances, The U.S. has been in the midst of significant macroeconomic events, wars, and extended recessions. 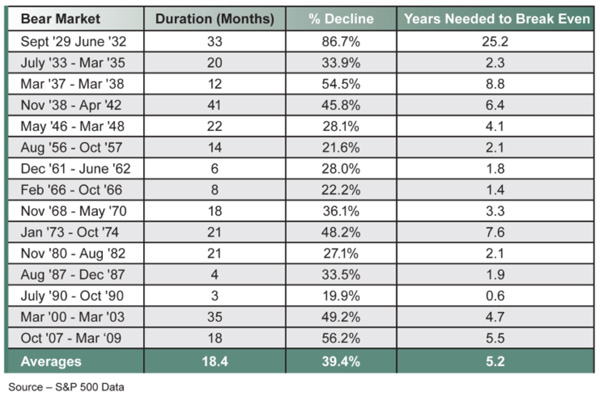 Currently we do not see the case for a recession in the near-term horizon in the United States. While trade talks and tariffs have taken a bit of a toll on some global growth expectations, the economy here in the U.S. appears to be on a fairly steady footing. Our GDP estimate for 2019 is for 2.5% growth, which is below the trend of the last few years, but still positive.

We believe one of the greatest silver linings for investors at the end of 2019 is going to be the resurgence of diversification working again. Investment-grade bonds now yield around 4%, and close to 7% can be obtained in the high-yield corporates. It has a been a while since these types of returns have been available in fixed income. This return to the normalization of interest rates no longer forces investors into being over-weight in equities. Look for the aggregate bond index to return close to 5% for 2019.

Another potential area where diversification may once again work is in international stocks. After an abysmal year in 2018 where most indexes were down at least 15%, we expect out-performance relative to the U.S. Indexes in 2019. The continued Brexit drama in the early part of the year may keep a lid on international returns early, but look for weaker valuations and perhaps a weakening dollar once the Fed pauses as an opportunity to add exposure to this asset class.

After a decade long bull market we were overdue for a large pullback. It might feel good to sell everything and hide during bear markets, but as history has taught us, these drops can be excellent buying opportunities for long-term investors and an ideal time to rebalance portfolios. After this bear market capitulates, we anticipate balanced portfolios to once again achieve annualized returns of 8% or more for the next 3-5 years. If you have immediate cash needs for the next 6-12 months, then keep money on the sidelines to hedge against volatility. However, the remainder of portfolios should be trending towards being fully invested. Once Fed Chairman Powell waves the white flag, it will be time push all your chips in.